How I Went From Military To Sex Worker

Why Not Join The Military?

My story starts at 17 when I enlisted in the U.S. Army.  Leaving the nest was nerve wracking for me.  I constantly thought about the 'hows'.  How was I going to support myself?  How will I get a job with good income?  How do I start college?  Can I even afford college? Fear was guiding my future.  I come from a background of many family struggles.  I knew what I needed wasn't going to be given to me and that I had to work for it.  At that time, I was convinced the military was the best choice for me.  My older brother had served his four years and always glorified his lifestyle.  Fast cars, lots of money, and always getting away with everything he ever did wrong. So I went for it.


Fast forward 2 years.  I've completed training and I'm stationed in my home state just a few hours away from my home town.  My life is nothing like how they promised me.  My marriage was nothing but a high school fantasy and costing extra money every month. Being sheltered by the military was my current reality.  I guess I felt more confident about my future because of the resources and benefits that I had earned, but I felt like my freedom to express myself was stolen.  The rules I was made to follow held me back, and that's when I started rebelling. I developed some medical issues which gave me the excuse to stop showing up, being active, and not carrying out my duties. By the end of it, I had collected around 37 FTR's ( Failure to Report).

My commander started my discharge process and that's when it hit me.What the hell was I going to do as a civilian?  The income I had been receiving was about to be cut off!  I was about to be kicked to the curb and left out to dry.  My future was concerning me and I acted quickly to figure it out.  Around this time all of my leaders and peers had given up hope and basically let me do whatever I pleased.  My thought process on what I could do outside of the military went to a dirty and darker place (so I thought).  Sex work.  Now I've never been the most confident girl but I knew my hips and baby blue eyes could seduce a man with great ease. I call this a superpower, every woman is equipped but most don't know how to utilize it.

The Next Best Thing: Stripping!

I went a few hours north and settled in Atlanta, better known as HotLanta. I fell in love with the city and thought it was the most amazing place. The best strip clubs in Atlanta were in all of the hottest rap songs I have loved and listened to for years. I knew I could find and utilize my divine feminine energy here... and so I did.  My intro into sex work started with a website.  I didn't have much knowledge of anything in the adult industry so most of the decisions I made were very naive.  But hey, all you can do is learn from your mistakes.  I ended up flying around the east coast with my first professional pornography company.  I enjoyed it until I realized how harsh the industry really was, and at this time my mental health was in a decline due to my low self esteem.
Negative thoughts were always in the forefront of my mind: I'm not skinny enough, I don't have the 'Hollywood' features, I won't make the cut...  This was apparently all in my head because everyone in the industry wanted me to sign or film with them.  I just couldn't see past my clouded mind.  My situation got controlling and our agreement went sour.  I ran from a situation that I didn't understand and into the arms of another situation, except this one was even more dangerous, but I was too naive and stubborn to listen when I was warned. Then I flew to central Florida chasing a dream and luxurious promises.  Long story short, it was abusive.  Luckily, I found my way out.

I learned how to use all of my resources, take care of myself, and prepare my future.  I thank sex work for really opening up my eyes to the world and helping me mature even further in my adult career.  I've learned so much and now have a wide range of various incomes.  Sex work is not my end goal in life but has led me on my path and will help me achieve it eventually.  The adult industry can really mess up your mental image of yourself and your self worth.  If you want to live this life you have to be strong and trust in yourself and find the right people to trust and work with.  I wish you the best of luck.

StripperLife AND Beyond - The Official Adult Entertainment Blog

Staying Positive In a Negative Time

An Idle mind is the Devil's workshop Silence can become very loud. I'm a mover and I like to make moves. So what can I do?!... 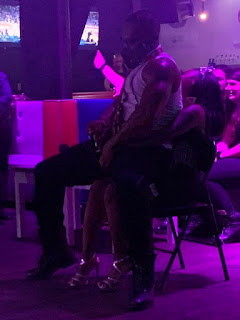