Hey guys! This blog is all about the dumb things guys do/say at parties that I'm at. It was really fun writing this one, so I hope you're entertained from it, too. And what's so funny about this blog is that it really is just directed at guys. I've done parties that females were at and they followed all of the rules and didn't do anything that I didn't like. I've also done all girl parties and they were so respectful and never broke any of my rules or made me feel uncomfortable. Boys are just dumb at parties. I understand that they just get excited, though. So even though it does bug me, I get it at the same time. Anyways, here are just a few dumb things guys do!

1. Blatantly break one of my rules (or more) thinking I won't see or notice. This one pisses me off! I hate it when people make me feel like I'm stupid. I know I'm not, so when they try to be sneaky and do things thinking I won't notice- yeah, it makes me mad. They think that I'm stupid and it really gets under my skin. Like the last party I did. One of my rules is that there is no videos or pictures during the show. This old guy was obviously taking a video of me and I confronted him about it. He argued with me thinking that he could get out of it. I made him delete the video, but it still bothered me that he really thought I was stupid and wouldn't notice. I'll just say I didn't dance on him or go near him for the rest of the night. Momma doesn't play with that.

2. Asking me how much it costs to have sex with me after I've clearly stated I am not an escort. This one is just so stupid. It's crazy how men really don't know what to do with the word "no". I don't know if it's the way that they were raised or what, but some men really do not understand that no means no. It doesn't mean maybe and if you keep asking me I'll say yes. It means NO. Get it through your head that I am here to dance and entertain. There's no afterparty show. I'll do private dances but even when I'm doing that there's nothing more than dancing going on in that bedroom. I'm just a dancer ladies and gentlemen. Sorry to disappoint!

3. Slapping my pussy. This one is just painful! I think that guys forget that the vagina is super sensitive. So when you slap it, it hurts more than when you slap my ass or my arm. It stings and makes my pussy throb! No one wants to see that and I don't want to feel that. I absolutely HATE when guys do this. It's not cute at all and doesn't turn me on in the slightest bit. It makes me ignore you for the rest of the night which nobody likes. So respect me because I am human.

So, yeah those are just a few dumb things that guys do at parties besides at times just being cheap and pretending they don't have money to spend. I really do love my job so it sucks when guys do some of these things because it irritates me and makes me not want to stay long because I'm on edge. So, be nice and use your brain people! I've said it before and I'll say it again: just  because we are strippers and are in the sex industry doesn't mean we don't have feelings. We are people too, and we deserve respect just like anyone else.
- October 02, 2019 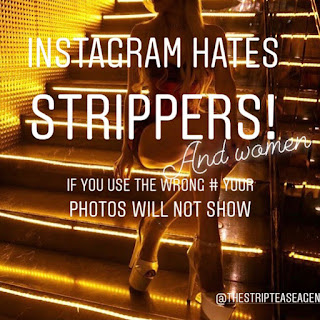